“For I know well the plans I have in mind for you, says the LORD, plans for your welfare, not for woe! Plans to give you a future full of hope. When you call me, when you go to pray to me, I will listen to you. When you look for me, you will find me. Yes, when you seek me with all your heart… ” ~Jeremiah 29:11-13

Hi, fellow home-schooling teens!! My name is Catherine Munoz. I am a homeschooler from Monrovia, California, USA. I am in the 12th grade. This is my sixth column for the “Homeschooling Teen e-zine”, and I am excited to share more columns with you all in the future! 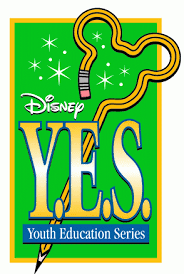 I have been accepted into Disney’s Youth Education Series (Y.E.S.) Individual Enrollment, which offers high school students classes at Disney Resort Parks and are conducted by professional Disney instructors. The Disney Youth Education Series is dedicated to providing educational experiences for students in an exciting and encouraging environment, teaching leadership skills, particularly within the Disney Company, and cultivating creativity in the arts, and knowledge through the humanities and science.I’ll be attending two classes this fall of 2011. I believe this will be a rewarding experience, and am really looking forward to taking part in this program!

It is really great that Disney offers homeschoolers the opportunity to experience a class within their parks. I initially looked into it to see just how affordable (or unaffordable!) the classes were. After all, I assumed, “This IS Disney, and anything as quality must be close to unattainable”. Well, here comes the good news: it turns out the tickets are extremely affordable, and that they are almost at a more discounted price than regular Disney park tickets. (Yes, you heard me right!) The “experience” or class ticket itself is a flat $33 (VERY affordable, if you ask me!), and a class ticket combined with an admission ticket ranges in price from $57-$71, depending on choice & date of class. I will write about my own personal Disney Y.E.S. experience in my November Column!

“I would like to mention that when I first started incorporating Music Corner into the columns, I mentioned that Paramore is not a band that displays consistently moralistic actions or lyrics. But just recently I found, by looking on Wikipedia, that Paramore is considered a Christian band. Now that I am thinking about it, Paramore does speak positively about God in their songs, and they thank Him a lot in their album acknowledgements. So, I apologize for considering Paramore a band that shouldn’t be listened to. On the contrary, it most definitely should.” =o)

Leigh Nash is a Christian singer/songwriter from Texas, USA. She has been singing and playing country-type songs on her guitar since the young age of 12. She used to be the singer for a popular band from the late 90’s, called, Sixpence None the Richer. S.N.T.R. first released their album when Nash was only 16. Commonly heard songs by them are, “Kiss Me”, and “There She Goes”, both songs which were top-rated on the radio. Nash released a solo album years later in 2006, called, “Blue on Blue“. She also recorded with Jars of Clay– who is another well-known Christian group– on their newer album release “Good Monsters”. Interestingly, despite her hometown being Texas, she never developed an accent. That is audible if you listen to her music. I like that her sound is original. Her lyrics can be taken as spiritual, and are even romantic sometimes.

Anberlin is an American Christian alternative- rock group. They formed in 2002 and are still together recording. Their latest album, “Dark Is the Way, Light Is a Place“, was released last year in 2010. They have a great vocalist, Stephen Christian, and an awesome drummer, Nathan Young. These components make for a wonderful band altogether. A few of my favorite songs by them are: “Paperthin Hymn”, “Time & Confusion”, and “A Whisper & A Clamor”.

Laugh-out-loud funny, yet poignant and touching, I found “Madea’s Big Happy Family” to be a wonderful movie. It shows us how life is just too short to take for granted. Early in the movie, Shirley is given four to eight weeks left to live, after her doctor told her that her cancer was becoming more aggressive. In lieu of time, she wanted to get her three adult children together for dinner, in order to break the unfortunate news to them. Despite Shirley’s attempts at this– and Aunt Madea’s attempts, too– she is sadly unable to get them to gather. Like most grown children, they were simply too busy with their own lives to take the time to hear what their mom had to say. They had no idea what the urgency was. Unfortunately, they discover when their mom is on her hospital bed that she is dying of cancer. During Shirley’s last minutes of life, two out of her three children are at her side, along with her son-in-law, who is doing all he can to get his wife– her daughter, Kimberly– over to see her mom. Kimberly won’t pick-up her phone: she is very disrespectful towards her mother, and figured she would get to the hospital when it was convenient for her. Sadly, when Kimberly finally arrives at the hospital, it’s too late. Her husband informs her that her mother died. “Where were you?” he said. In shock, she walks into the hospital room to find her family there. When Kimberly sees her mom, she is in disbelief that she didn’t make it in time to say goodbye. This daughter, who was the most ruthless, and evil with her mom, can only cry, and hug her deceased mom saying, “I’m sorry, mom… I’m sorry!” Later, after the mother’s funeral, the Kimberly’s husband– who was close with the mother– tells Kimberly that her mom requested some last words to be spoken to her: “I love you. I’m so sorry, if I ever failed you.” The daughter was amazed at her mother’s humility. All those years Kimberly had spent disrespecting her mom had potentially warranted her mom to be angry and resentful. But being that she is a Godly woman, Shirley forgave her daughter Kimberly and supposed that it must be her own fault for having been treated that way. This was an extremely humbling moment for Kimberly, and she drastically changed her ways after her mother’s death.

What this movie– and particularly this scene– taught me is that there comes a time when it is too late to ask for forgiveness from those whom we’ve hurt. God is omnipresent: never ceasing to be ready to forgive us. In fact, He has already forgiven before we even utter, “Sorry”. But it is a different story in the case of our friends and family, neighbors and all other people we cause pain upon. Saint Francis taught us “it is in pardoning that we are pardoned.” I believe this is so true. It is imperative that we express our sincerity and apologize at the first opportunity we are given. For when that door of opportunity closes, it will be too late, and that pain, sorrow, and regret for what we’ve done will remain always with us. For being such a funny movie, Tyler Perry’s “Madea’s Big Happy Family” made me cry, and ponder the realistic angles of the storyline. I truly enjoyed it, and I would like to see it again!

“This is my own recipe for pumpkin muffins with streusel topping: perfect for the fall season. There is a lot of cinnamon in them, since that’s the only spice I use here, but feel free to add your own favorite spices to the batter as well!”

2.) Pour the batter into lined muffin tin. Combine topping ingredients, and sprinkle over batter tops. Bake each batch for 15-16 minutes, or until the tops of the muffins yield to the touch. Eat warm. Enjoy!